Discovering a protagonist: interview with Jákup Thomsen, what the future holds for Faroe Islands' attack

Jákup Ludvig Thomsen is one of the most promising players of Faroe Islands U-21. He was born in 1997 and he plays as striker. He has taken the first steps of his career in HB Tórshavn, the most winning team of Faroe. 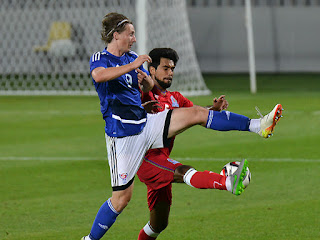 Jákup Thomsen playing for the Faroese Islands U-21 team against Azerbaijan (affa.az)

He moved to Denmark when he was 15 years old. He currently plays for FC Midtjylland. Last year, with FC Midtjylland U19, he reached the quarter final against Barcelona losing at extra-time in the Youth League where he've played all the five matches scoring a great goal against Atletico Madrid. We've talked him about his past, his future and football in Faroe Islands.

1. Jákup, you grew up in HB which is the most successful team of the Faroe Islands, now you're in Midtjylland which is one of the best Danish team. Are you satisfied about the first steps of your career?

I am very satisfied with my first steps in my career. I had some great coaches in Faroe Island, but that before I moved to Denmark; at FC Midtjylland (FCM) I started my real development. I was playing with some of the best players in the 1997, in the Faroe Island. I was lucky to be playing alongside them. When I moved to Denmark, I was playing with the best 1997’s in the country, which was shown by the three national championships we won in a row and six players from the 1997 who were selected in the U-19 Danish national team.
2. Which are your best memories about your life in Tórshavn, inside and outside the football pitch?

My best memories inside the pitch was the cup tournament in the U-14’s and U-16’s and my last year playing for HB. It was a great time, where I scored many goals and a lot of fun playing football. Now I am 18, soon 19 and I moved as a I was 15 year old. Therefore, my best memories are for sure the ones where I was with my family.

3. Are you still in touch with your former team mates?

I do not have contact where I write with them a lot, but I see some of them when I come home to play for the national team and of course I talk to them and we catch up. Sometimes I have been training with HB first team, when I have been coming home and then I have been talking a lot with them.

4. How did it go your transfer in Denmark? Were you aware about Midtjylland was looking for you?

It is actually a long story, but to make it short I had decided to go in 10 grade in Denmark, where I could play football in the morning and afternoon. In the beginning I was going to play for Vejle Boldklub (VB). No contract or anything, my parents payed for it. At the start of the summer, my parents and I heard some rumours about FC Midtjylland might be interested. We did not hear anything more about it, before one month before the start of the preseason. My mom simply called a scout from FC Midtjylland and the rumours were true. Then, no more than a week later I was ready to start for FCM. On the same conditions as in Vejle, but just for FCM.

5. How is your life in Herning? Which are the main difference between there and Tórshavn?

Actually, I live in Ikast, a small city 10km from Herning, where we train and so on. The main difference is mostly that I have much more opportunities to do things when I live in Ikast/Herning, because Denmark is so much bigger.

6. In Midtjylland you are already playing in the main team and in the youth team you've had lots of big moments. Last year in the Youth League you beat Atletico Madrid and you scored a wonderful goal by heading the ball into the net. You played a very good match against Barcelona as well. Have you any regret for losing that match in the extra time?

Regrets and regrets… This is as football is, we had wonderful adventure in the youth league and it is something I would never change. It was/is one of my biggest football achievements so far in my career.

7. You are one of the main players in Faroe U21 and you will play soon in Faroe main team. Faroe national team has improved very much in these last years as we have seen against Greece and Hungary. Faroe U21 is doing a good job as well. In same case it has been unluckly such as against Germany, when you were 1-1 at the end of the first half, or against Azerbaijan when you deserved to win. What future holds for Faroe national team? In your opinion, is it possible to repeat the Icelandic miracle?

There is a big future for the Faroe Island national team, because the players on the main team are so young. It is the same for the U-21, which means when Hallur, Brandur, Sonni, Joan Simun and so on, reach their best years. There will be many, many good and young players coming up to the national team and I believe that in the coming years, we are going to start playing in the qualifiers. The main team are going to get many points and we will be close to qualify, especially to the Euros, because of the new rules on how many teams qualify.

8. You've been compared to Jóan Símun Edmundsson by some reader of our blog. What do you think about him? What's your opinion about that?

It is of course a confidence boost, but with that said, I do not think we look that much alike. He is a very technical gifted player, while I am using my speed and power a lot more. I think he is an amazing number 10, playing in small areas and so on, while I am a striker that likes to get the ball deep and be in the box.

9. Which is the player who inspire you the most?

I like to learn from a lot of players, by looking at them, but my idol is for sure Fernando Torres, his pace, power, finishing while playing in Liverpool, just simply amazing. Now he is still a great striker, but he is more a player in the box.

10. What do you think about Italian championship? Would you like to play in Italy someday?

It is an amazing league and it would be a dream to play there, for sure.

11. What are your dreams and hopes for your future?

My dreams are to make a breakthrough in the Superliga or Scandinavia. Get to bigger leagues and improve myself all the time.
Pubblicato da Fabio Quartino alle 21:19:00