Interview with Magnús Már Einarsson: living football at the football pitch and at the keyboard!

Fotbolti.net is the best site on the web about Icelandic football. It's a valuable source of information about our favourite championship and it's a very important point of reference for #CIEF. We've got the chance to interview Magnús Már Einarsson who is both publisher at fotbolti.net and a football player in Icelandic championship. 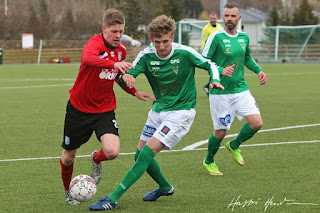 
Magnús Már is born in 1989. He began his football career in Hvíti riddarinn, before moving to Afturelding, Leiknir Reykjavik (where he played a couple of match in Pepsideildin), Huginn and then back to Afturelding.

We've talked to him about his football experience and we've asked him what he thinks about the Icelandic football "golden age" as we've seen not only at Euro 2016, but with Iceland U21 and Iceland women's national team too. Enjoy!

1. Magnús, you are both a journalist for fotbolti.net and a football player in Afturelding, 2.deild. How is living football in both side of the football pitch?

It is fun. Of course it is difficult work wise sometimes but I have great co-workers who help me so I can still play football.  I enjoy playing football and I want to play while it's still possible for me.

2. Afturelding missed the promotion in 1.deild for a couple of points at the last match of the championship. How do you feel about that?

Obviously I am disappointed but we have nobody to blame except ourselves.  We only won one game of the last five and didn't deserve to go up this time.

3. Afturelding has got the second best attack and the third best defense of the championship. Are you satisfied or disappointed about last season?

We played some fine games during this season but there is always room for improvement.  We should have scored little bit more goals and we should have conceded less goals.  We should also have done better against the teams in the top half of the league.

4. What can you tell us about your previous experiences with Leiknir Reykjavik and Huginn? What are your best memories with those two teams?

5. This summer you were in France shoulder to shoulder with the Icelandic national team at Euro 2016. How did you feel when you heard “Lofsöngur” playing for the first time in such a prestigious competition?

It was brilliant to see Iceland play against the best teams in Europe.  It's something that I have been waiting for since I was a young kid.  To see the team do so well at the tournament was just brilliant.

6. What is your fondest memory about your days in Annecy?

I had great time in Annecy with other sports journalists from Iceland. It was a privilege to work at Euro 2016 and I hope I can see Iceland play at another major tournament in the future.

7. Before Euro 2016, during the debates in our blog, quarter final were told as the possible target for Iceland. At Fotbolti.net, what were your expectetions about Iceland before Euro 2016? What has been Iceland's best issue during Euro 2016?

I always thought we would get out of the group.  To face England in the last 16 was good, because I always had a feeling Iceland could do well against them.  To go to the last 8 was magnificient achievement which might be difficult to top in the future.

8. Guðmundur Benediktsson has become very famous for his commentaries next to a stroke, especially for Arnór Ingvi Traustason's goal against Austria and Ragnar Sigurðsson's and Kolbeinn Sigþórsson's against England. What can you tell us about him?

Guðmundur is highly respected sports commentator here in Iceland. He is funny and very lively on air.  He also has great knowledge about football after playing in the premier league in Iceland for many years.

9. English football is very popular in Iceland. Many people there support Manchester United, Liverpool, Chelsea and so on. How was your feeling after Iceland's victory against England?

It was a dream to see this result. I think I will never forget this night in Nice.  It was purely amazing!

10. Road to Russia 2018 has begun with a draw in Ukraine. Iceland hasn't been so far from winning the match. What's your opinion about this match? Is it possible for Iceland to go to Russia 2018?

The players and coach are trying to put France behind and concentrate on the qualification.  Of course people in Iceland are still talking about this amazing Euro but now we need to focus on next step.  The aim for the team is to go to the World cup.  It will be tough but I think there is a chancce.

11. Iceland U21 is quite near to qualify to Poland 2017. Is it possible? What can you tell us about Eyjólfur Sverrisson?

It is a good chance, yes.  If they win the last two games at home, than they will qualify.  The games against Scotland and Ukraine will be difficult but I am quite optimistic the team will finish the job.  Eyjólfur is a former national team player who has been coaching the U21 team for many years.  He got the team to the final tournament in Denmark in 2011 and hopefully they will again to to the final tournament now.

12. Icelandic female national team has done a wonderful qualifying round. Freyr Alexandersson is doing a great job since 2013. What expectations have you got about this team? Is the best national team ever?

It is the best national team ever, I think. They only lost one game in the qualification and only conceded two goals.  It will be interesting to see how far this team will go in the final tournament next year.  I think they can go out of the group and to good things!

13. While national teams are doing very good, Icelandic clubs are struggling to pass european cups first rounds. How can you explain this difference? How can Icelandic teams improve their european competitivness?

14. What are your projects and dreams for your future?

Just to keep on improving Fótbolti.net. Hope you will keep on follow the website
Pubblicato da Fabio Quartino alle 15:13:00