Faroese football is living a brilliant moment. Faroe Islands main team have recently obtained several satisfactions as the two victories against Greece during the Euro 2016 qualifications, a draw against Hungary after a good match and the great victory against Latvia during the Russia 2018 qualifications. 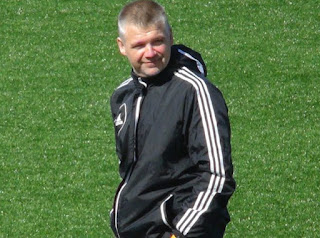 Áki Johansen was born in 1969 (facebook.com)

We've recently talked with Jákup Thomsen, one of the most promising Faroese player, who said us that the best is yet to come.

We have contacted Áki Johansen, U17 Faroe Islands coach, who has just conquered a wonderful qualification at Euro 2017 Elite Phase to ask him what he thinks about it.


1. Áki, first of all congratulations for the qualification to the Euro 2017 Elite phase. What did you feel at the end of the match against Luxembourg? Did you expect to move to next round?

Thank you very much, the last part of the game against Luxembourg was the way too exciting, at 2-0, we felt that we had good control of the game. But we had everything to lose at this point, if we lost the game we would be out, but the boys stood up to the pressure and I'm very proud of them for that. We knew that it would be very difficult to move on to the next round from this group, and that we needed at least one point in one of the first two matches aginst very good teams, if it should be possible, we made it and that is almost unbeliveble.

2. You have competed for three good matches, winning the first challenge against Czech Republic with a great performance. Did you expect this result? What do you think about the performance of your players in this match?

Many would argue that it is easier to make a surprise or upset in the first group match, but this was a team ranked number eight in Europe that we were up against, so you need to be more than lucky to get points or a win against at team of that quality. We were very well prepared for the meeting with the Czech Republic, we were of course aided by that we scored very early in both halves, so the game runs a little on our terms. In this game we were good with the ball, and we were excellent in defense, our goalkeeper had no major save in this game

3. Luck did not help you during the second match against Switzerland. The opposing team scored a goal after few minutes and your goalkeeper Bárður Á Reynatrøð blocked a penalty. What is your opinion about this match? Could you do it better?

As against the Czech Republic, we were well prepared, Switzerland was probably even better than we expected. We decided to start with the same 11 as in the first game, and this was possibly a wrong decision from us, it was obvious that several of our players had very heavy legs on the day. They create many opportunities, but their first two goals are personal mistakes from us.

4. You qualificated by winning in Luxembourg and Tórur Jacobsen scored two goals by head. Did you feel a little bit of anxiety in the last minutes after Luxembourg equalizer?

We were very nervous the last few minutes, and it was evident in our game. In this last minutes we had  everything to lose, we have not tried that to often, and perhaps we have learned most of all, in these last minutes, it is a good experience for the future

5. The draw for the Elite phase will be held in Nyon the 13th December. Some matches of the first phase must be still played, but which are the national teams to avoid broadly? In your opinion, is it possible to dream of a qualification to the final phase in Croatia?

We would obviously like to avoid the biggest favorites, such as Germany, France, Holland, Spain and England. If we draw one of the biggest favorites I would like it to be Italy, we have never met Italy before and it would be an exciting experience for us. It is difficult to qualify for the elite round, and it will only get harder to qualification til final phase, but we believe in the possibility, that's why we participate.

6. Your squad is valuable. Many players are doing well in the Faroese youth leagues. How do you judge your group?

We have a reasonably strong squad and players, but with the exception of two players, they all play in the domestic league. If we are to become even stronger as a team and individuals, we need more players abroad to play in stronger tournaments. Several of the players in this squad have the potential to do that.

7. Will there be news in the next call ups or do you think calling the same players?

There are no guarantees in the football world. Although it can sometimes seem unfair, there are no free tickets for the elite round squad. Most of the players will surely be with us, but we might do a few replacements in the squad.

8. Ten players have always played in these three matches. Except for Bjarti Vitalis Mørk and Símun Sólheim, you used all the squad. You gave space to everyone, but will Filip Í Liða (who is still 15) and Jógvan Petersen have more space in the next match?

Bjarti and Símun are both very young players and will later have the opportunity to play for U17. There will always be some players who do not get as much playing time, but they still have great importance for the squad

9. How do you judge your first experience as a manager of the Under17 national team?

I have been with the youth teams for several years now, and we are always learning something new. This means that we can prepare ourselves even better for each tournament. This is of course the greatest football experience we have had, because it is the first times that a Faroese team has moved on from the first round.

10. How was born your passion for football and which have been your experiences before Under17?

Football has been in my blood all my life and I can not imagine a life without football. I have more or less had a coaching position for the past 30 years. In the last 10 years I have worked as a coach part time.

11. Faroese football has grown a lot in the last years. Faroe Islands national team have recently obtained several satisfactions as the two victories against Greece during the Euro 2016 qualifications, a draw against Hungary after a good match and the great victory against Latvia during the Russia 2018 qualifications. Many blog readers dream of seeing a historic qualification of Faroe Islands after Icelandic miracle. Is it possible for you?

The short answer is yes, it will take time but yes.

12. As an outer, how do you judge Italian championship? Would you like to be a manager in Italy?

I love Italian football and it is a very strong league with a lot of good teams. Many of my heroes have played or been coaches in the Italian league. I have derived much inspiritation from Italy. Should an Italian team call me up, I am ready to take the next plane and start a new football life.

13. Which are your dreams and your aims for the future?

They are one and the same, if I get the opportunity, I would like to go abroad to be a coach. It could very well be in a smaller club, with focus on development. But first I would love to qualifying U17 to the final phase in Croatia.
Pubblicato da Fabio Quartino alle 12:09:00