Interview with Heiðar Ægisson: the young star of the star team of Garðabær

Stjarnan is the Icelandic name for "Star" and it's a football team located in Garðabær. It was founded in 1960, it's playing in the Icelandic highest league since 2009. In 2014 Stjarnan won the Icelandic title for the first time in its history and reached the play-off final round of Europa League, losing against Inter Milan, after having beaten Bangor City, Motherwell and Lech Poznan. 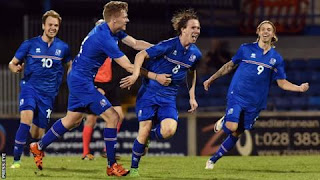 
We've talked to him few days before the match between Fjölnir and Stjarnan, so he is kepting his promise to bring Stjarnan in Europe again. We hope he will do the same thing with Iceland U21 to Euro2017!

First of all it was a great team goal. Óttar got the ball in the right flank and did really well to find my teammate Ævar in the box. Ævar found the right pass to me and I placed the ball in the top left corner. The feeling when the ball hit the net was fantastic and it was great to celebrate the win with the guys after the game.

2) Unluckly you lost against France, but it's still possible to reach the top of the qualification stage. What are your expectation about the matches against Scotland and Ukraine? Will Iceland U21 be able to go to Euro 2017?

The game against France was really hard. We fought well and got our chances, but at the end of the day they came on top. Players in their squad are playing at the highest level in Europe and it can be difficult to compete to that. Our aim for the final two games is to win them both and that is what we got to do to qualify for Euro 2017.

3) Stjarnan has had a very good first half season, by being several time at the top of the table. During these last matches things are not going so well. What's happening to Stjarnan? Is it possible to qualify to Europe League yet?

We have had an up and down season here at Stjarnan. Things haven’t been falling for us lately but we will fight through the end of the season together as a team and claim the Europe League spot in the end.

4) We think at Rúnar Páll Sigmundsson as one of the best Icelandic coach. What can you say about him? How is his way of working?

Rúnar is a great coach and he has helped me a lot to become a better player. He came to Stjarnan and started coaching the U19 team in 2013 when I was there and we haven´t been separated since. It’s been enjoyable working with Rúnar and I owe him a lot.

5) Duwayne Kerr has been Stjarnan's goalkeeper during this season and now he's left to go playing in Indian Super Leauge. How much important was Duwayne's international experience for your team?

Duwayne Kerr is a great character. He is a loving and cheerful person and makes everyone around him smile. Duwayne was a great player and an important part of the team and it was difficult to lose him. I wish him all the best with his professional carrier and I hope to see him in the near future.

6) How did you feel in 2014 when Stjarnan became Icelandic champion for the first time in his history?

2014 was an unbelievable season for Stjarnan and one we will never forget. Going unbeaten in the league and becoming Icelandic Champions, playing against Lech Poznan and at San Siro against Inter Milan in front of 50.000 fans. It was something else. I will always be thankful to have had the opportunity to be a part of this amazing journey.

7) What do you think about what Iceland did at Euro 2016? What do you need to do to be called by Heimir in the national main team?

What Iceland did at Euro 2016 was a ridiculous achievement and the players and the staff deserve all the praise they can get. For me, I have to keep developing my game and work hard and hopefully I will get my chance.

Yes, of course. If they believe in it and keep performing well they can achieve great things.

9) Three Icelandic players have already played in Italian championships (Emil Hallfreðsson, Birkir Bjarnason and Hörður Björgvin Magnússon). What do you think about Italian football? Would you like to play in Italy someday?

Italy is a great country and I think that Italian football is at the highest level. The players are both very physical and technical. I highly enjoy Italian football and it would be a dream come true if I got the chance to play there.

10) Which is the player who inspire you the most?

Francesco Totti is the player who inspires me the most. To have played with Roma for 24 years, with over 600 games for the team, and he is still scoring goals at 39 years of age. What a legend!

I just started studying business at University of Reykjavik this fall so learning and playing football takes most of my time these days. Other than that I am a huge fan of the great sport of basketball and I try to play as much as I can with my pal Pétur Már Bernhöft.

My dream is to play professional football abroad and I hope I can achieve that in the near future.
Pubblicato da Fabio Quartino alle 17:52:00