Interview with Sigurður Grétar Benónýsson: how life changes from Vestmannaeyjar to North Carolina

Sigurður Grétar Benónýsson was born in 1996 in Heimaey. He has spent his life and football career in the archipelago until he has moved to USA at High Point University, North Carolina.

He has played both for KFS and IBV. He has debuted in Pepsideild at the beginning of this season, playing 8 matches and scoring 2 goals. Now he is playing in the "Big South Conference", a collegiate athletic conference affiliated with the NCAA's Division I, and he is doing even better: 18 matches played, 10 goals and 4 assists. 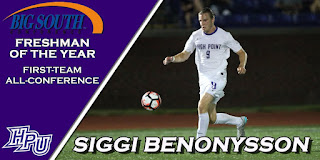 Sigurður has been nominated “Big South Men's Soccer Freshman of the Year” (twitter.com)

He is doing not only a football experience, he is majoring in Psychology and minoring in coaching too. We've talked to him about how life has changed by moving from Vestmannaeyjar to North Carolina. Enjoy!

1. Sigurður, you grew up in Heimaey, where you played at first in KFS and then with ÍBV. How was your period in Vestmannaeyjar with the two teams of the island?

I played for all the junior teams back home as a right midfielder, and trained with the first team for the first time when I was 16 years old. I was in the teams’ squat for the first time that year against Iceland’s current champions FH. When I played my last season with the junior teams I became a central forward. At that time, I played for ÍBV juniors team and KFS (on a loan). I scored a lot of goals and had a good season for both teams. Last summer I played for ÍBV in Pepsi-deildin and started most of the games, unfortunately I did not finish the season because I had to get to North Carolina before my season started here. My main goal has always been to win the league or the cup with my hometown club, hopefully I get to do that one day!

2. This year KFS has been relegated to 4.deild after having played in 3.deild for two years in a row. What do you think about this club? Do you think that it will come back in 3.deild?

It is important for ÍBV that KFS plays at the highest level possible so young player at the club can take advantage of it and play more games. It was good for me to play with KFS, I gained a lot of experience playing for them that one season. Playing in the 3 division is obviously more physical than the junior teams so it helps young players to take the next step and hopefully play for the first team. I really hope that KFS will play in the 3 division again after next season. Hjalti Kristjánsson the KFS coach is the Icelandic Sir Alex Ferguson so I do not worry about it that much.

3. On the other hand, even this year ÍBV has avoided relegation in the last rounds but it has almost won the game against Valur in Borgunarbikarinn. During this season Bjarni Jóhannsson has resigned. You played with ÍBV just the first games. What is your opinion about this season?

We started the season very well but then unfortunately we did not get the results we wanted in the second half of the season and we ended in 9th place. Like you said we did well in the cup and made it all the way to the finals, that might have affected the regular season. But we just have to look at the positive site of it, some young players from the island played their first games and got a lot of experience this season which will help the club in the future.

4. Now you have moved to High Point University in North Carolina. Can you tell us the background of this transfer in the USA?

High Points coach went to Iceland and saw one of my pre-season games, I had dinner with him after the game. He told me everything about the program and why he wanted me there. I had lived in Heimaey my whole life and I felt like I needed to try something different. I took the offer, and here I am.

5. What do you study in the United States? Can you conciliate study and football?

I am majoring in Psychology and minoring in coaching. It is extremely hard to be a Student-Athlete so I try to be organized, even though I am not most of the time. During the season we play two games every week, train every day, and of course study all the time. It can be very difficult sometimes but it is worth it. The school’s facilities are amazing, luckily I have a lot of good people around me that have helped me so much for the past few months.

6. How was it to settle in a country with a so different life-style? Which are the main differences between the USA and your homeland?

It was hard to move to another country so far away, and getting use to new culture, rules, and norms. I will never forget my first night here, I was walking to the supermarket and the police offered me I ride to the store, to wait for me, and drive me back home. The people here are really friendly, it is very common that people you’ve never seen before stop and asks you how you’re doing. I have to admit it, sometimes I avoid making eye contact with others so I won´t have to hear all about how their day has been. There are just a lot of little things like that I was not use to back home.

7. In your personal career, you have already got some gratifications. You have been nominated “Big South Men's Soccer Freshman of the Year”, playing all 18 games with 10 goals and 4 assists. What can you tell us about your championship and your team in the USA?

Yes, I could not have asked for a better season, even though I always want to do more. This program has been growing fast for the past few years, we have one of the best facilities in college soccer, young team that is only going to get better, and the right mentality to do even bigger things in the next few years.

8. What is the level of the American championship as regards Pepsideildin?

I was really surprised how good the level was when I first got here, to be honest I did not know a lot about collage soccer before I came. Americans read and play the game differently sometimes, I had to get use to that. Players are very athletic and want to run a lot. I would say that Pepsi-deildin is a little bit more physical and it obviously has a lot more experienced players, some of them have played professionally for many years.

9. Do you miss Heimaey? Are you thinking of staying in the USA, coming back to Iceland or searching for a new club in other countries in Europe?

Sometimes I get a little bit homesick and of course I miss my family and friends, it can be hard to live so far away from everyone. At the moment I am a Collage-Athlete, I do not really think about it that much. I always try to take advantage of my opportunities and focus on the things am doing right now. It would be amazing to play in the MLS or somewhere in Europe on day.

10. Which player do you take inspiration from? Which are your idols?

I always try to listen and learn from the oldest and most experienced players in the teams I have played for. Growing up my idols were Cristiano Ronaldo and Hermann Hreiðarsson. For the last few years I have really enjoyed watching Zlatan Ibrahimović.

11. Do you like following or practising other sports in addition to the football?

When I was younger I played a lot of sports, soccer and basketball have always been my two favorites. I watch soccer when I can and sometimes basketball, but I use to do it a lot more when I was actually practicing and playing the sport. Americans obviously love American football; it is always on the TV so I am kind of forced to watch it sometimes.

12. What do you like doing in your free time?

During the season we do not really have much free time, it is all about training, playing matches, and studying. But when I have some free time I usually just watch TV episodes, talk to my family and friends back home, or hang out with my teammates.

13. Which are your dreams and your hopes for the future?

My dream has always been to play soccer professionally and for my country, I am always open for new experience and challenges, that will hopefully help me in the future.
Pubblicato da Fabio Quartino alle 15:15:00