Ögmundur Kristinsson was born in Iceland in 1989. He has been playing for Fram Reykjavik since 2006 to 2014, before moving to Danish team of Randers. He made his debut in the first squad at the of 16. He won the 1.deild that year and the Icelandic Cup in 2013.

In 2015 he signed a three years contract with Swedish club of Hammarby IF, becoming the third Icelandic player there together with Birkir Már Sævarsson and Arnór Smárason.
Ho
Ögmundur made his first international appearance on 4 June 2014 in a match against Estonia. He has collected 10 caps with the Icelandic National team and he has been selected for EURO2016.

We've contacted him and we are very proud to host his interview in our pages. 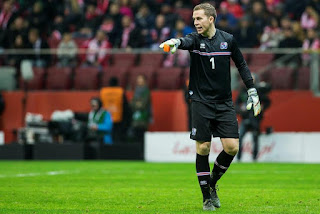 1) First of all, congratulations for your convocation at the European Championship, Ögmundur. How have you been when you received Lars' and Heimir's call?
Thank you so much, I was preparing for a game with Hammarby when the team was published. So me and Birkir Màr watched the press conference together. And when I saw my name I was very proud.

2) You started your career playing in Fram Reykjavik and you've been playing there until 2014. What are your best memories with Fram? Are you still in touch with your former team?
Winning the cup with Fram was a great moment. And yes, I still keep in touch with the players that I played with in Fram.

3) Fram is one of the biggest society in Iceland but is facing many difficulties in these last years. It has been relegated in 1.deild and last year it was close to being relegated in 2.deild. In your opinion, what are the reasons of such difficulties?
The way there are too many rotation in the club both trainers and players.

4) What does Fram need to come back in Pepsideild?
Keep Àsi (the acutal coach Ásmundur Arnarsson, ndr) as trainer and build solid team

5) You've been playing one year with Randers before joining Hammarby. Why did you decide to leave Denmark?
I got a good contract offer from Hammarby! And Hammarby is a big club in Sweden.

6) Two other Icelandic football players are currently playing for Hammarby: Birkir Már Sævarsson and Arnór Smárason. How importan have they been for your setting in your new team?
Birkir was here when I came and it is nice to know someone when you are new so he helped me a lot. Now Arnór as also joined Hammarby and we spend a lot of time together.

7) Hammarby is currently in 12th place in Allsvenskan. There are many teams in few points and you are not so far from the third position. What's the goal for Hammarby in this season? Just trying to avoid relegation in Superettan or aiming for a higher goal?
Hammarby's goal is to become a solid Allsvenska club.

8) In your opinion, what are the main differences among Icelandic, Danish and Swedish championships?
Sweden and Denmark have bigger league and better players, and everything is bigger around the football too.

10) Three Icelandic players have already played in the Italian championship (Emil Hallfreðsson, Birkir Bjarnason and Hörður Björgvin Magnússon). What do you think about Italian football? Would you like to play in Italy someday?
I like Italian football. It's one of the biggest leagues in the world. And I would like to play there someday definitely!

11) What are your hobbies? What do you like to do in your spare time?
I play golf, and then just doing something with my wife.

12) You had your debut in the national team on the 4th of June 2014. Did you expect all these beautiful moments in only two years? What has changed since your debut against Estonia till now?
No, it was hard to imagine these things happening, but it has been going well so you got the feeling something was about to happen.

13) The big day of the debut against Portugal is getting closer. How are you living these last days before the beginning of the European Championship?
Just same as others, I'm playing with Hammarby now so I must focus on that.

14) What do you think about your stage with Portugal, Austria and Hungary? Are you satisfied about the draw?
Yes, it was a fine draw and three games that we can go on and win.

15) What is Iceland's goal for Euro2016? In your opinion, is it possible to reach the Quarter-Finals?
Yes, everything is possible and we have showed that we can win the "big" countries.

16) You, Hannes Þór Halldórsson and Ingvar Jónsson are three very good goalkeepers. We think it has been a very hard choice for Lars and Heimir not to cap Gunnleifur Vignir Gunnleifsson and Haraldur Björnsson. Who is going to be the first-string goalkeeper in Euro2016?
That's up to the coaches to decide and I just focusing on Hammarby at the moment.

17) What are your dreams and your hopes for the future?
I dream to go on and play in bigger league in Europe.
Pubblicato da Fabio Quartino alle 16:23:00