Jákup á Borg was born in Tórshavn, on 26 October 1979. He made his international debut for the Faroe Islands national team in 1998 against Bosnia, and he collected 62 caps, scoring 2 goals. He played for three teams in his career: B36 Tórshavn, HB Tórshavn and OB Odense. He is a living legend of the Faroese football, and our blog contacted him for a short interview. Here it is: 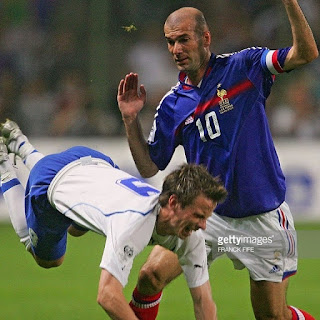 1. Jákup, your career started in B36, but then you went on loan to the Danish league side OB Odense after some trials at Liverpool and Watford. You played with HB - the most successful club in the Faroe - and finally you returned home to B36, without forgetting what you did in Faroe national team. A real legend of the Faroese football. Are you satisfied with your career on the field?

"I am really happy and grateful of what I have done. If there is one thing I regret, then it is that I didn't go abroad when I had options in Iceland and Norway".

2. According to many managers, it’s a blessing to have such an adaptable player like you. You began playing as a defender, you played as a midfielder, as a wing and of course as a striker, scoring a large number of goals. What’s your favourite position on the field, if there is one?

"I am happy to play where the coach wants me to play - as long as I play. But my favourite position is right midfielder, I love setting up goals".

3. You won many leagues, you had the opportunity to play abroad for a short period, you had some trials at Liverpool and Watford, you were Faroese league topscorer in 1998 and 1999. Could you tell us which are your most beautiful memories about your career as a player?

4. Playing abroad is something quite rare for a Faroese footballer, expecially in the past. Apart from Odense and the trials in England, did you have other opportunities to play abroad? If yes, why these opportunities did not come true?

"I had offers abroad, but didn't wanna leave the safe and good Faroe Islands, this I regret today. I should have given it about 4 years to try to see how far I could go".

5. Which is for you the most important club from a sentimental point of view?

"The most important Club is B36 - this Club have given me so many good memories, and that I am very thankful for".

6. This year Víkingur Gøta became champion for the first time in its short history. What’s your opinion about this fact and about this young but ambitious and winning club?

"It is good to see other Clubs outside Tórshavn winning it (but not too often :) ) but Víkingur have been champions many times when they where called GÌ".

7. You played several matches against other national teams. For example, you played a good match in Tórshavn against Italy on June 2, 2007. You lost 2-1, but you caused great problems for Italian players. How did you feel when you came so close to an historic result against such an opposing team?

"We were close sometimes to cause upset, and this is such a great experience, to play against these players we look up to and see on the tv :) but the national team today are close almost every time to cause an upset - they belief in themselves, and that is great".

8. About national team, recently Faroe got very important results: we can think to the victories against Greece during Euro 2016 qualifications ot to the draw with Hungary and the victory against Latvia during Russia 2018 qualifications. According to you, can Faroe Islands repeat the great and recent Icelandic success, even if not as resounding as that?

"I think we have a very good group of young and good footballers in the national team, they believe in each other, and I think they can achieve alot - maybe not as much as Iceland, but not far from them, we are all vikings! :) ".

9. Recently Áki Johansen and his Under17 reached a historic goal by qualifying to the Elite round of European Under-17 Championship qualification. Even Under19 went so close to this result. Many interesting players have already international fame. You in B36 know very well Magnus Holm Jacobsen, Benjamin Heinesen, Hannes Agnarsson, Erlendur Magnusson, but also Sonni Ragnar Nattestad, Brandur Hendriksson Olsen, Hallur Hansson e Jóan Símun Edmundsson, which play in the national team. Do you think that Faroe Islands national team can have a rosy future thanks to the contribution of these young players? More in general, who could be the new Jákup á Borg, in your opinion?

"The future is bright. We have many talented players here, and most of them want to go abroad to play. We get more and more players abroad, and that is important to continuing developing".

10. Our blog appreciates the “secondary” leagues, because we think that, in spite of a lower quality, these leagues still preserve the true essence of the sport. There is not the poison typical of the most important competitions, there is no racism (as far as we know). Do not you think that in some cases the meaning of entartainment of the sport is disappeared?

"I think it is important to understand why we love football. We love to play, enjoy scoring goals and do some tricks. This we have to bring to the pitch. Of course you have to have a plan/tactic, but the most important thing is to enjoy doing what you do".

11. Do you have a favourite league? Usually Nordic people prefer English Premier League, maybe beacause is more similar to your features. But what’s your opinion about Italian league? Do you follow or like some clubs?

"I follow Ac Milan - they just won against Juve in Italian Super Cup :) This is from the time of Baresi, Maldini and the Dutch players".

12. When you were child, who was that inspired you? Who was your idol?

"Roy Keane, Eric Cantona were my favourite players. They play with all their hearts".

13. What do you do in your free time? Do you have hobbies?

"I have my own buisness (bilrokt.fo) so there is not so much time, but: work, football and my fantastic wife and two children. I used to play handball (also in the best League)".

14. If we say ”Jákup á Borg new coach of Faroe Islands”, how do you feel? Is it a concrete aim for you, in the future?

"I want to see how far I can go and football. I want to challenge myself all the time, so maybe head coach of the national team - why not ? :) ".

15. More in general, do you want to remain in the football? What do you dream for your future?

"I live today and today full out. I don't think so much about the future. I love the sport football, and as long as I love the game I want to be active. When or if my passion dissapear, then I will stop".
Pubblicato da Giuseppe Emanuele Frisone alle 14:48:00