Interview with Kristinn Steindórsson: back from the US to Europe with Iceland in the suitcase

Kristinn Steindórsson is born in Reykjavik in 1990. He began his career playing with Breidablik and he was part of that team which was able to win the first and only championship and Icelandic Cup of its history. 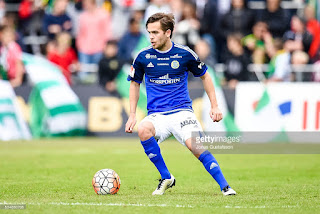 
In 2012 he began his international career by moving to Sweden. He joined Halmstads BK and he played there for three seasons. In 2015 he collected two caps with the Icelandic national team, scoring two goals against Canada and USA, and he played in MLS with Columbus Crew.

This year he has come back to Sweden, in GIF Sundsvall. Here you are what he has told us about his best memories and his future.

1) Kristinn, you began your career in Breiðablik where you won both Borgunarbikarinn and Pepsideildin. Which are your best memories about this period in Kópavogur? Are you still in touch with your former team and your former team mates?

The best memories are obviously lifting the trophies. Both of them were the first time Breiðablik won them. To do it with a lot of good friends who you'd grown up with and played with since we were little. We still keep in touch and usually meet up when we are back home on vacation.

2) What does Breiðablik need to win the championship again and to go far in European competitions?

I think they need a little bit more experience in the team. The talent is there.

3) In 2012 you moved abroad for the first time, at Halmstad in Sweden, and you played there for three seasons. How is changed your life during that period? Was it your first time living outside Iceland?

That was the first time I moved from home and Iceland. It changes your life when you have to live alone for the first time and learn a new language and being in a new country. You grow as a person and become more mature. It changed my life for the better.

4) In 2015 you moved to the US, playing for Columbus Crew. In these last years, Major League has grown so much and many top players come there to play such as Pirlo, Lampard, Drogba, Gerrard, and so on. How has it been your experience in MLS and in Ohio?

It was a great experience playing in the MLS even though I wasn't happy with the playing time I got. The league is better then most think and it was really fun living in the US.

5) In Columbus Crew, you played together with Federico Fernando Higuaín, Gonzalo's brother. What's your opinion about him?

He's a good player and a nice guy.

6) In January you came back to Sweden at GIF Sundsvall. At the beginning of this experience, also Rúnar Már Sigurlaugarson Sigurjónsson was playing there. Has it been easier for you to start this new season with a fellow countryman in the new team?

It helps when you have another Icelander already there. He knows the club and the town and can help you settle in quicker. It's also nice to be able to talk a little Icelandic at training.

7) GIF Sundsvall is currently in 13rd place in Allsvenskan, with +5 on Helsingborg which you defy the next weekend. Are you satisfied about your position in the championship or were you looking for a better position?

No. I can't say that I'm happy. We had a really good start to the season but after the Euros we've had a bad period. I've also been injured and not being able to help my team wich is frustrating. I'll be back soon though and hope we can get some good results in the last games and climb the table.

8) Iceland national team has been the biggest revelation at Euro 2016. What do you need to do to come back in the national team? Will be easier for you after moving in Sweden?

We have a really good national team so it's hard to make the squad. I've been dealing with injuries this season but soon I'm back and then I need to play good to have a change of being picked. It's probably better to play in Europe to increase the changes of getting picked.

9) You've got two caps and two goasl scored with Iceland. You scored both goals during the tour in the US in january 2015, one against Canada and one against the US. How did you feel after having scored with your national team?

I felt proud and happy.

10) Im your opinion, is it possibile for Iceland to qualify for Russia 2018?

Of course it is. It's a tough group but we have a really good team as well.

I like the NFL so follow that a lot. Otherwise just hanging with friends and having fun. Soon I will start studying as well.

To go further and higher in my career. Than what I do when I'm done I don't know. Hopefully something I love to do.
Pubblicato da Fabio Quartino alle 17:41:00