Discovering B-67, the dream team coming from the Artic Circle

After Icelandic and Faroese football, our blog is going to discover Greenlandic one.

Greenland is the biggest island in the world and over three-quarters of which is covered by permanent ice. It has a got a population of about 56.000 people who live in small villages by the sea. Greenland has got its own parliament and government, but it still keeps a strong relationship with Denmark. Greenland and Denmark, together with Faeroe Islands, are the United Kingdom of Denmark.

Nuuk is the Greenlandic capital and it's the hometown of B67, a kind of Barcelona of the Arctic with its own Arctic Messi: it has won eleven championships since 1993 and have a topscorer with an impressive scoring record.

I tried to have a videoconference with someone belonging to B67 board and I discovered that Greenlandic connection is much better than in Genoa back country. Thanks to board member Finn Meinel and chairman Christian Laursen, we've travelled through Greenlandic football and B67 history. 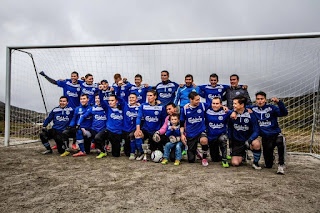 B-67 first team celebrates the umpteenth trophy (B-67 courtesy)

1) First of all, how is life in Nuuk?
Nuuk is a 17.000 people city by the coast and it has got services and opportunities like other European cities. In your spare time here you can do outdoor activities like hiking, climbing, fishing and skiing. Indoor are a good number of training facilities, as well as high quality cinema, cafes and restaurants. We can say that here, life is as in other European cities but a bit calmer. It's a bit colder too: now we've got -15° and we can have -25° as well.

B67 was born here in Nuuk in 1967 and at that time, there were already two other football teams, GSS and Nûk.

2) Is football a popular sport in Greenland?
Football is the national sport in Greenland. Only in Nuuk there are five clubs and every small village in Greenland has got at least one football team. In the whole Greenland, there are about 80 football teams.
There are no grass pitches here because of the weather conditions. In Nuuk we have one small 60x40 meter pitch with artificial grass, and a full size gravel/dirt pitch. We play outdoor between late May and September.
Futsal is very popular too. We play it indoor for the great part of the year. The Greenland Futsal Association is waiting and hoping to be accepted as a nation to participate in official games. We've already played friendly matches against Faroes Islands and Denmark and won against both.

3) Are you optimistic about Greenland admission to FIFA?
We are waiting for it, we need a pitch for international matches. It's important to make Greenlandic football compete at international level. FIFA has approved FieldTurf grounds and our government is working to establish a covered and heated stadium in Nuuk.

4) Once achieved admission to FIFA, would you prefer to affiliate to UEFA or CONCACAF?
We are going to go with the first who take us! North America is nearer, but we probably have more things in common with Europe.

5) B67 won eleven championships since 1993. How can you be so strong?
In the mid/late 1980s the club focused on youth and trainer development and this has paid off. B67 has participated in championships since 1968, but never won up until 1993. We are now intensifying our training of the kids, but try to maintain a balance between elite training and other traning.
We have got good indoor facilities and have had good coaches for many years. We have got good players and we train a lot. I've set up some statistic for this interview: for example in the last five years, we won 85% of senior matches and we lost only one time. Eleven players coming from B67 play in Greenland national team.
We are doing a good job in other categories as well. U18 team has won the Greenlandic championship 13 times since 1980. Women team is doing very good as well, they’ve played eight finals since 1988 but unluckily, they’ve never won a championship.

6) What about your players?
This year the first team has used 34 players, this because the national team went to Island Games in Jersey in June, and as we told you, we have eleven players on the national team.
Therefore we had to use players from second team, U18 and even one U15 teams in the City tournament, which we won anyway.
From the list I would like to highlight a few of our outstanding players. John Kreutzmann 44 years old, he had his debut in 1991 so he has played 25 years on the first team. Norsaq Mathæusen, our topscorer, 62 games and 77 goals, that’s Ronaldo/Messi style! Nichlas Storch Nielsen the one U15 player who had debut on the first team.

7) Have you ever played against foreign teams?
Yes, we have. Of course, we played just friendly matches. We have been playing several times in Iceland and our kids have recently been in Reykjavik for a tournament. We have got many contacts with Iceland and we are in talks with a big Icelandic club to improve and exchange our knowledge and to keep our job more professional.

8) Does B67 practice any other sport in addition to football?
At the moment we have Badminton, back in time we also had handball and table tennis.
We have a oldboys football team who is winning the most of matches it plays. We only play in Nuuk, so when championships are played in another city we don’t participate.
Finally, in 2005 started the Greenlandic indoor football championship. We won it nine times, the last eight in a row.

9) What do you hope for B67 future?
We hope to go on with winning, of course. We hope to keep on improving. We hope to compete at international level and to become even more professional than we are doing right now.

10) Have you got any sponsor?
Yes, we have. Sponsor are very important for us. Our main sponsor is Carlsberg, and we also have Polar Seafood Greenland (which also sells to Italy) and The Bank of Greenland.

11) What does Greenlandic football need to keep on growing?
It needs many things. The most important things are facilities for practicing this sport. Then we need prepared coaches and to invest in football knowledge. Most of all, we need money to do all of that! 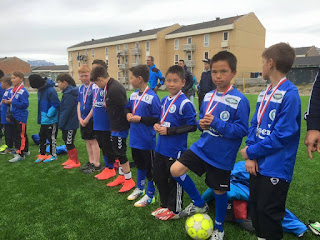