Discovering a protagonist: interview with Birkir Már Sævarsson, a long trip around Iceland, Norway and Sweden

After the interview with first time national Oliver Sigurjonsson, it's time to talk about a Icelandic national veteran: Birkir Már Sævarsson. He was born in 1984 and he is a cornerstone of Lagerbäck's team with 54 caps and playing on both wings.

He is spending his career between Iceland, Norway and Sweden. He played for Valur and Brann before arriving to Hammarby this season. He is getting prestigious results both with his clubs and the national team. He has still got a strong bond to Valur, the team where he is grown, and many satisfaction to achieve with Hammarby and Iceland. 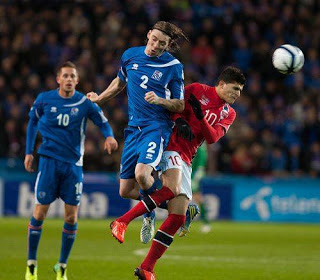 1) Birkir, 31 years old, 54 caps in the national team and many championships played through Iceland, Norway and Sweden. Are you satisfied about your career? What have been your best moments in these three countries?​
Yes, I'm very satisfied with my career. I have been lucky in that way that I have gotten the opportunity to play for big clubs with a lot of fans in all of these countries. My best moment in Iceland was winning the league in 2007 and that was extra special because Valur is the club I played for since I was 5 years old. In Brann the best moment was winning 6-3 against Rosenborg away in 2011 with me scoring 2 goals. The best moment in Hammarby are the two wins against AIK and the home victory against Djurgården because these two teams are also from Stockholm and the games against those teams mean alot to the fans. Therefore it was fanstastic to beat those two teams.

2) How did you feel at the referees's whistle at the end of the match against Kazakistan? It took place a huge celebration inside and outside Laugardalsvöllur. How is being considered a national hero?
​It's hard to describe the feeling with words because this is such a huge achievment for Icelandic football. But mostly I felt extremely proud to be a part of this team.

3) Last two friendly matches agains Poland and Slovakia didn't go in the right way even if you did a good performances. What's your opinion about that? Against Slovakia, has Alfreð Finnbogason annulled goal conditioned the match?
​We were playing two very good teams and we were especially happy with the first half in both matches where we were leading 1-0. But even though the performance was ok we are never satisfied when we lose. And, of course, if Finnbogason's goal wouldn't have been offside then I think we would've won the game because then we would've gotten 2-0 early in the second half and killed the game. But instead they scored two quick goals and then it's difficult to come back.

4) Valur, your former team, had a good season with 5th place in Pepsideild and the national cup victory against KR. Do you still follow Valur?
​Yes, I try to either watch their games via internet or follow the results on icelandic football websites. Winning the cup final was, of course, fantastic because it's been 10 years since the last cup win for Valur. And it made it extra nice that it was KR that Valur beat in the final, Valur's biggest rival!

5) You've been a important player for Brann. You played there for six seasons with 168 caps and 15 goals. Why did you decide to left Brann for Hammarby?
​I left Brann beause I lost my place in the team early in the 2014 season and I couldn't risk missing my spot in the national team because I wasn't playing in Brann. And when Hammarby showed interest it was a very easy choice because it is a big club with amzing fans. 25000 average per game and they sing and support the team no matter how the result is. That kind of atmosphere is almost impossible to get elsewere in Scandinavia and I knew right away that I would love playing for Hammarby.

6) Last season Hammarby had a difficult season with 11th place in Allsvenskan. Do you think Hammarby could do better in next season?
​It not that surprising that we came 11th considering that Hammarby has been in Superettan (Serie B) for 5 years. The goal was to establish ourselves in the league and that worked quite ok. But next year we would like to come higher in the league and I think the squad, with maybe a few new signings, is good enough to compete in the top.

7) What do you think about italian championship? Would you like to play in Italy someday?
​I have followed the Serie A since I was little and AC Milan has always been my favorite team in Italy. I try to watch games with AC Milan, Inter and Juve when I can. But I have to admit that I haven't followed it as much in the last few years as I did when I was younger. Yes, of course I would like to play in Italy. It would be a dream come true.

8) Our blog only talks about Icelandic football, but Icelandic national teams are doing very good in handball, as always, and in bastekball too. Icelandic sport is living a great moment. Is there any particular reason for that?
​I think the facilities have a lot to say in that matter. Especially the facilities for playing football has improved a lot in the last years and now Icelandic football players can play football the whole year and not just in the summer. Another factor is the mentality of the icelandic people. We never give up and most athletes will do whatever it takes to live their dream of becoming a professional athlete in their sport.

9) What do you do in your spare time? Have you got any particular hobby?
​Most of my free time I spend with my family as it is a very big family. I have 4 children so the day is usually packed with some activities with my wife and children. But when I have some free time I like to watch sports on TV or listen to music. I would say that besides sports, music is my main hobby.

10) What are you going to do to keep the best shape in these next months? Are you going to go with the national team in Abu Dhabi in jannuary?
​I'm still training with Hammarby until the 4th of december when we will take a few weeks off. But then I will have a individual training program to keep in shape. I don't know yet if I'm going to Abu Dhabi but I sure hope so.

11) Have you always played as winger and fullback during your career? What do you like to do the most on the field?
​When I was young I used to play forward or winger. I didn't play as a fullback until I was 21. I would say that what I like most is participating in the offense. Specially when i get an assist after a cross.

13) What are your dreams and hopes for your future?
I​'m getting so old now that I don't really have any dreams of playing in a bigger league any longer but it would be great to win some titles here in Sweden and participating in the european cup with Hammarby before I quit.
Hope this is good enough and that the answers aren't too long!
Pubblicato da Fabio Quartino alle 17:18:00