Discovering a protagonist: interview with Oliver Sigurjonsson, from Breiðablik to Iceland national team

Iceland qualification to Euro 2016 is the tip of the iceberg of a football movement, the Icelandic one, which is rising quickly. Both male and female Icelandic youth teams are doing very well. Between them, U21 is standing out from the top of their European round ahead of France, Scotland, Ukraine, Macedonia and Northern Ireland.

During last friendly matches against Poland and Slovakia, Lagerbäck and Hallgrimsson have launched some talent coming from U21 team. At only 20 years, Oliver Sigurjonsson has gained his first cap and a good international experience. Thanks to our passionate colleague Mattia Giodice, we have talked to him the day after his debut. 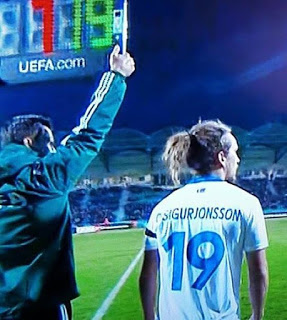 1) Oliver, last week you received your first call from Iceland national team and last night you collected your first cap against Slovakia. How have you felt in these last days?
I've had some great last days. It has always been my goal to play for the national team. Now I'm going to make bigger goals and keep work hard. I'm going to enjoy the moment

2) You've collected 7 caps with under21 team too. At only 20 years, you've already achieved a good international experience. Do you believe in a call for Euro 2016?
If I do not believe in it, then no one is going to believe it. I hope that I can go to Euro 2016 but it's going to be hard because there are many really good players in the squad. Like you are saying, I have lot of experience with the youth national teams and I have up to 50 youth national matches. I think that will help me when I play these games. I know how to act and how hard you have to work to win a national match.

3) You went to play in Århus team of AGF when you were only 17. Why was your experience in Denmark so short?
AGF bought me when I was 16 years old and I played there for 3 years. I played a lot with the reserve team and also with the U19 team. The first coach was not willing to give me a chance and in the last months I got injured. So I decided to go home, try to improve and play first team football.

4) This year you had a very good season with Breiðablik: you've been League Cup winner and Pepsisdeild runnersup, very close to FH. Are you satisfied about your season with Breiðablik? Do you think Breiðablik can win Urvalsdeild next year?
Yes I'm satisfied with the season. Of course we wanted to win the trophy but hopefully we will win next year. If we get good players in for the players who are going to leave, then we have a big chance!! For me personally, I was happy with my performance, of course you can always improve. I was voted the best young player of the season and in the team of the season from every media.

5) This season Breiðablik had the best defense with only 13 goals against during the championship. How important is having a experienced goalkeeper as Gunnleifur Gunnleifsson?
He is one of the best players in the league! I can not describe how important he is on and off the pitch. A really good and beautiful man

6) What are you going to do to get fit in the next months? Will you play Bose tournament?
I'm now on a trial at Arminian Bielefeld who plays in Bundesliga 2. After that week I'm going to play in the Bose and train with Breidablik. There is no stress being fit because the season doesn't start till May next year

8) Icelandic football has grown a lot in these last years and Icelandic national team reached a historic qualification to Euro2016. At present, it's only lacking a Icelandic club qualification at Champions League and Europe League group stage. In your opinion, what do Icelandic teams need to achieve this last step?
Good question. In my opinion we need more important matches! I want more artificial grass fields so the season can be even longer like in Russia and Norway. We need to improve and the tempo needs to be higher to get even better.

9) In Pepsideild there's a reasonable number of foreign players, about four per team. One of the strongest, Jonathan Glenn, played with you in these months. What do you think about him? Which are the other foreign players who impress you the most during last season?
Glenn is good player and much better than I thought when he played for IBV. He is fast, strong and good finisher. Jonathan Hendrickx is really good and one of the best in the league. Steve Lennon is also very impressive.

10) You play as midfielder, but you've scored goals too: 2 goals in Pepsideild, 2 goals with the Under21 (a great double against France). What do you like to do the most on the field?
I like to score from free-kicks. I love to make good long passes and also when you play one touch football with your teammates and the opponent has no answers.

11) What are your dreams and hopes for your future?
I want to play more national matches. My goal is to play at a good team in the top 5 leagues in Europe. Also to be happy and enjoy play football.
Pubblicato da Fabio Quartino alle 12:32:00