Together with few other states, Faer Oer are a genuine exception to modern football, based on business and tv. Faer Oer national team has proudly faced best European teams, playing without overpayed professional players. We all remember when Italy played against Faer Oer in 2007, few months later having won FIFA World Cup in Germany. Azzurri won 2-1 with difficulty.

We begin our report on Faroese football with a former powerhosue team: EB/Streymur. This team was founded in 1993 by the merger of other two teams, EB and Streymur. Since then, it has won 2 championships, 4 national cups, 3 national super cups.

This year EB/Streymur has been relegated. We have a talk with Signar í Homrun, in the club board since 2010 and chairman since last summer. The team is passing thorugh a difficult generational change and it's taking on it with the head held high and believing in forthcoming success. 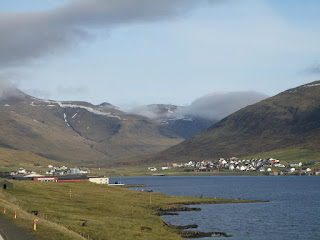 1) In 2012 you won your last championship, in this season you've been relegated in 1 Deild. What's happened to EB/Streymur?

What happened was, that 10 of 11 start-up players, either changed to other clubs or retired. The reason to the change of some players to other clubs, was partly reasoned to financial difficulties and otherwise to the need for something new. This is probably a result of, that this team, that has been concentrated around a number of players, that have played together since 2004-06, and therefore close to none new players were prepared to the top league. And thus, as the change came, the club was unprepared, and the result was a team with very young and unexperienced players filled in.

2) Do you think to come back immediately in Effodeildin? What are you going to change to reach this goal?
We started out, as mentioned, with a very young team. This team, although relegated, has showed a huge improvement in both skills and determination, and we therefore have faith in our young team, that they will win the 1 deild, and regain place in Effodeildin.

3) Eliesar Olsen has led your team this season. Will you reconfirm him or are you going to hire a new coach?
There will be a new coach. At the moment, the replacement is not decided.

4) How many people has got EB/Streymur as staff?
EB/Streymur is a grass-root club. The only ones who get paid, are coaches for first team, players on the first team (semi-pro’s), coach for second team and first women team, and a few others, who receive symbolic payment.

6) Many young players have played in EB/Streymur during this season. Are you satisfied of your youth team? Which is your most talented player?
We think that our young players have met the challenge with great courage and ambition, and we think that their struggle has been an inspiration and one to admire. We do not think that any single player deserves particular mentioning, but rather the team as a team, deserves due recognition for its effort.

7) In 1993, why did you decide to merge two teams, EB and Streymur, belonging to two different islands?
It was done, because both clubs thought that if we were to compete in the top league, it was necessary to forge strength, and history has shown that it was the right decision.

8) How many EB/Streymur's players come from Streymnes and Eiði?
The players of EB/Streymur are geographically from the area between the two islands Streymoy and Eysturoy, which are the two biggest islands in the centre of the Faroe Islands archipelago, which include many villages other than only Streymnes and Eiði. And a few players from outside this area.

9) How are Streymnes and Eiði involved with your team? How is the attendance at EB/Streymur's matches?
The municipality of Eiði and Sunda (which Streymnes is a part of) support the club financially as well as with providing pitches, club house and so on. With out this support it would be pretty much impossible to have a club like ours.
The local attendance support, sadly, has declined over the last years. But this is a sad recognition all over the country, as more and more people tend to stay at home and watch Premiere League, La Liga and other ligas on tv, rather than attending local matches.

10) In 2008 you faced Manchester City in Europe Leauge. You lost, but you played two grat matches. When will we see EB/Streymur playing in Europe again?
In 2017!
Pubblicato da Fabio Quartino alle 12:29:00