Interview with Freyr Alexandersson: the coach of the Iceland women's national football team

Freyr Alexandersson is the coach of the Iceland women's national football team. He begins his work for KSI in September 2013. This is his third experience on the bench, after Valur women's and men's from 2009 to 2012 and Leiknir Reykjavik from 2013 to 2015. 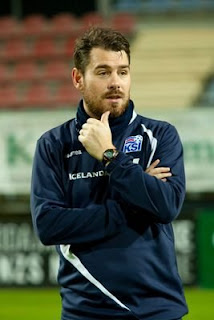 Iceland women's national football team is having a wonderful 2016: third place at Algarve Cup and 21 point on 24 in the qualification to Euro2017. The 2017 UEFA Women's Championship will take place in the Netherlands. This will be the 12th edition and sixteen countries will compete for it. Iceland is told to have the best team ever. How far will Iceland go? Here you are what Freyr has told us about:


1. Freyr, first of all congratulations for what you are doing with Icelandic women's national team. Last two years have been great for you. You were third in Algarve Cup 2016 and you ended qualification to Euro2017 with 21 points in 24. What's your feeling about that?

Thank you, it has been a great time the last two years. Since Algarve cup 2015 we have been aiming at getting better in every game. That has been the case and we have won 76% of our games in that period. For me, my staff and the players that is always great to reach your goals. Our big goal was to win our group in the qualification, we manage that and all the other goals we wanted to achieve we manage to do so we are satisfied.

2. This Icelandic women's national team is said to be the strongest of all time. How do you feel about training such a good team? Are you feeling any pressure about that?

It is so difficult to compare teams from year to year, I do not know if this team is the best or not. But I know that this team is very strong and has the ability to go even further than the teams before. It is great to coach Icelandic national team, I am honoured to be coach of Iceland. Regarding pressure i can not say that I fell pressure, but that is maybe because I put the most pressure on my self. We are Icelanders, we always thing big, that is good but we have to control our thoughts and put our dreams in to real things, that means hard work, every day. Otherwise you will get no results.

3. On 8th november, qualifying rounds of Euro2017 will be drawn. For the current ranking, you will be in the third group. Which teams do you consider best favorite for the final victory?

Less than a week, i am looking forward to this. Favorites are Germany, France, England and Sweden, Norway, Spain are all going in to the competition with huge expectation’s.

4. During the qualification, you won seven matches in eight, with 34 goals for and 2 goals against. Only Spain, France, Germany and Switzerland did better than you. Is it possible doing better than in 2013 when you reached the quarter final?

We should have done better in the last game against strong Scotland team. It was not a game that we should lose, but first 25min of that game where very poor. On the other hand. We did play very well, scored a lot of goals and conceded few. I am happy that you mention us at the same time as those great nation’s that you have mentioned. We belong there.
Can we do better than 2013, first of all. Only two teams will go trough from the group stage, Iceland did go trough as number three in 2013. We have to reach top two in our group, that is the first step. If we can make that, we can do everything….sky is the limit. But first we need to be in top two in the group.

5. Few days ago you've been in Chongging to play Sincere Cup 2016 against China, Denmark and Uzbekistan. Are you satisfied for what you've done in these three matches?

It was great to be in China, good tournament and great organizesation by CFA.
We played very competitive match against China, really happy with that match and results where fine. Unhappy with the results against Denmark. Not a good game and poor results. In the end it was good to end the last game with an win and clean sheet.

6. Icelandic women's national team met a great enthusiasm in China. Did you expect that? What's your opinion about this country, so much different from Iceland?

No I did not expect that, It was great. We loved the Chinese supporters and the people was so nice. Totally different to Iceland, climax and big city’s that we have not seen before.

7. Against China and in the second half against Uzbekistan, you played with a 3-5-2. Are you satisfied about this try? Will we see Iceland playing like that at Euro2017 as well?

I am satisfied with that experience. I needed to test this now and we manage to perform well in that system. I do not know what I will do regarding that system at the euros. We will see.

8. Berglind Hrund Jónasdóttir has made his deubt in the first team against Uzbekistan. She plays for Stjarnan which has won the Icelandic championship. She has been defined by the Icelandic media as one of the most promising player in Pepsideild. What do you think about her?

Berglind is talented, she is in my opinion the best young goalkeeper that Iceland has now. She can be good, but she is young and has only played one season at top level in Iceland. As I told her, she needs to work hard and be patient. One day she has the opportunity to be Iceland’s nr.1. When that time comes she has to be sure that she is ready. I am sure she wil do well and has bright future.

9. Several players from the U21 team have debuting in the first team in these last months. What do you think about Icelandic women's young players? Will we see any of them at Euro2017?

10. In your football career you've been at Leiknir Reykjavik, both as player and coach. What are your best memories in Breiðholt?

I have so many great memories from my time at Leiknir. Most valuable is the friends that I have made through my time at Leiknir. As a player there is that moment when we won the 2.league in 2005. That was very important for the club, not the best team in the clubs history but for sure the most passionate team ever. Great moment.
As a coach I will never forget the moment we reach our goal to get promoted to the Pepsi league after win against Þróttur at home. Very emotional moment.

11. You've worked for Valur as well, before as main coach in women's team and than as assistant in the men's one. What are your best memories at Hlíðarendi?

Have some great memories from my time at Hlíðarendi. I think that I could not have been more lucky with my job at that time then that job I had at Valur at this time. I learned from so many great coaches and leaders in that historical club. Best memories are season 2009 with the women’s team when everybody expected us to be failure but we stood up as champions in league and cup.
Season 2011 with the men’s team was great, we where going in the right direction with great group of players and staff. That team had the chance to be great, that did not happen thoug.

12. What are your dreams and goals for your future?

I have big dream and goals. I want to go as far as I can with my career as a coach.
At this moment I am at a good place, I am happy with my job as a head coach for this great women’s national team. My role with the men’s team is great at fit’s my job has head coach well. So I try to be in the moment and do my best there.
Next goal is to do well at the euros and enjoy preparing the euros.
Regarding my dream…….hard work pays off!
Pubblicato da Fabio Quartino alle 15:40:00