Interview with Hallgrímur Jónasson: Húsavík, there and back

Hallgrímur Jónasson was born in Húsavík in 1986. He has played for his hometown club, Völsungur, debuting at the age of 16 before moving to Þór Akureyri in 2003 and than to Keflavik in 2006.

In 2009 he begun his international career with the Swedish team of GAIS, in Gothenburg. In 2011 he moved to Denmark where he played for SønderjyskE and OB. He is currently a player of Lyngby BK. 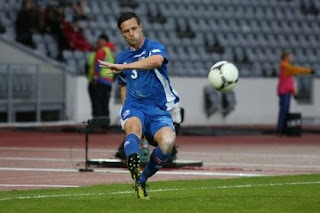 He has got 15 caps with Icelandic national team. He made his first appearance in 2008 in a 3-0 victory against Faroe Islands. He has scored three goals for Iceland, two of them in the same match, a 5-3 loss against Portugal.

Here you are what he has said to us about his career around Europe:

1. Hallgrímur, you come from Húsavík, a small town in the north coast of Iceland. You began playing there with Völsungur, then you move to Þór, Keflavík, GAIS, SønderjyskE, OB and Lyngby BK. What are your best memories of your time in these teams?

My best memory with Völsungur is when we were Icelandic champions when I was 14 I think. I was with my best friends and to win with them was fantastic.
Then in senior football I won the cup with Keflavik in 2006 and that was a great felling. I played with a player from Faroe Islands, Simun Samuelsen, and he was great that season.
And after I became professional I am really proud to be the captain of OB in Superligaen.

The difference is that now I am 14 year older :D
I have became more experienced and learned a lot. Now I train on a whole different level in a good league. But as a person, I am the same guy. I know were I come from and I love my hometown and my country a lot.

3. Húsavík is a very nice town. It has become a centre of whale watching, it's near lake Mývatn and Dettifoss waterfall. What's your connection with your home town? Do you come back often there?

Yea I try to go there at least twice a year. My parents live there and some of my friends. I follow the club and I love the place!

4. You moved to Keflavík in 2006, together with Kristján Guðmundsson. How important has he been in your career?

Kristjàn gave me the chance to play in the highest division in Iceland and that I am thankful for. He had seen me play in þór were he was coach before. He gave me good advices and we had a good relationship.

5. In 2009 you moved abroad for the first time, to GAIS. Was it your first time living outside Iceland? How has it been your experience in Göteborg?

I had been few months in NEC Nijmegen in Holland when I was 18 but this was the first time I moved for a longer period. Gothenburg is a great city and I learned so much in GAIS and playing in Allsvenskan. My family and I loved that time.

6. In SønderjyskE you've been next to 100 caps. Are you satisfied about what you've done in Haderslev?

Yes I am really satisfied. We got the best results in the club's history at that time and became 6th in the league and semifinal in the cup. We stayed up in Superligaen all the seasons and people were so happy in SønderjyskE.
The club grew a lot while I was there and now they have been doing really good in the league. My family had a fantastic time there and we met some great people in Haderslev.

7. You've played one season and a half in OB. Has it been easier to begin there with your national team mates Ari Freyr Skúlason?

Yea it is always easier when you know somebody in the club from the beginning. Ari and I have also been roommates in the national team for many years so it was perfect for us

8. Now, you are playing in Lyngby and your team is doing a good championship. What's the goal of your team for this season?

The main goal is to stay in the league. But we also know that we have a really good squad so we also dream to come in top six. So we can play in the top six group. Right now we are number 4 so we hope we can keep going like this.

9. You've got 15 caps with Iceland national team. What do you need to do to come back there? Will we see you at Russia 2018?

I need to keep playing good in Superligan. I have been part of the national team in many years now but to many times on the bench :)
I just concentrate on doing my best and hope that the new coach will look my way. You never know about Russia...

10. While the national team is doing very good, Icelandic clubs are struggling to pass european cups first rounds. How can you explain this difference? How can Icelandic teams improve their european competitiveness?

The difference is that all the players in the national team are playing abroad in professional leagues. But the Icelandic league is only half professional.

The teams don't have money enough to buy big players so they have to relay on their own players together with few foreigners who usually are not good enough for the professional leagues.

The teams have to work hard on those things that money can't buy, like hard work and mental strength. Also I think that Icelandic teams could be better tactically and that is up to the coaches to bring to the teams. And that doesn't cost much...

11. What do you do in your spare time? Have you got any particular hobby?

I spend a lot of my spare time with my family, I've got a wife and 3 kids. And when I am in Iceland I fish and hunt a lot with my father and brothers.

12. What are your dreams and hopes for your future?

My dream is to move back to Iceland with my family and give my kids a great time in the country we come from, when I am finished with football outside Iceland.
I hope that I can win some titles with my club here in Danmark and then I would like to be a coach one day.
Pubblicato da Fabio Quartino alle 13:00:00