KFS - playing football in Vestmannaeyjar, the islands of the Island

KFS, abbreviation for Knattspyrnufélagið Framherjar-Smástund, is a football club based in Vestmannaeyjar. It is actually playing in 3.deild, the fourth tier of the Icelandic football system.

It is the second team of the Vestmannaeyjar archipelago, together with IBV. This team was born in 1997 by the merger of two other football team: Íþróttafélagið Framherjar and Knattspyrnufélagið Smástund.

We had a quick talk with Hjalti Kristjánsson, main coach of the team. Enjoy! 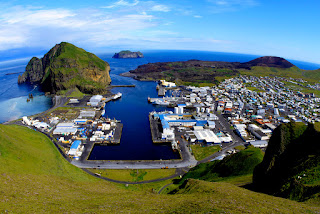 1) KFS ended last season at the 7th place in 3.deild. What are your goals for the new season?
Our goal is to get promoted to 2nd Division.

2) KFS didn't have a good Lengjubikarinn B with 5 losts in 5 matches. Are you more optimistic for the championship?
Yes, we have gotten many good players since then.

3) An experienced player as Tryggvi Guðmundsson has come back again to KFS. How important is him for your team?
He is very important. He can teach the other players a lot of things.

5) How is KFS youth teams organization?
We get young players on loan from our neighbour club, ÍBV.

6) KFS was born by the merger of two other teams, Framherjar and Smástund, in 1997. Are you satisfied by this choice? Are these two teams still working?
Yes, we are satisfied. No, they're not.

7) Is KFS in cooperation with IBV? How does it work?
Yes. We get players on loan.

8) Vestmannaeyjar islands has got 4.000 people and many football teams. Are you all football players there?
No.

9) Compared to other Icelandic teams, KFS has to pay for all the transfers from the archipelago to the "continent". How can KFS support these extra costs?
We support it with betting services from Icelandic Pools.

10) What are your dreams and hopes for the future of KFS?
To become a 1st-2nd Division team alongside ÍBV in cooperation with them.
Pubblicato da Fabio Quartino alle 15:54:00