Haukur Heiðar Hauksson is born in Akureyri in 1991. He is a right back and he began his career playing with his hometown team KA Akureyri. He reached the top of his Icelandic career between 2012 and 2014 with KR.

In 2015 he began his Swedish adventure with AIK Solna, missing the title for just three points.


Haukur made his first international appearance on 19 January 2015 in a friendly match against Canada. He has played most of the last matches of Icelandic national team and he is working hard to win Allsvenskan and to be in France next summer. 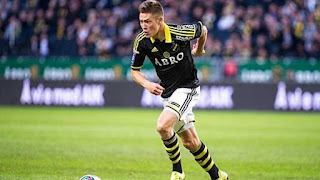 1) You began your career with KA in 2008. What are your best memories with the team of your home town?
I have a lot of good memories from my begin in KA, it is hard to pick something out but I really enjoyed my time there and I still am a real KA man. If I had to choose something it would be then Dino: Dean Martin, he was a coach there. He was tough and tough, he was maybe too tough sometimes but he was exactly what I needed at that time, someone who pushed me.

2) Are you still in touch with your first team? KA played its last season in Urvalsdeild in 2004. What does KA need to come back there?

3) You've lived the best part of your Icelandic career in KR from 2012 to 2014. What are your best memories of those years?

I think it has to be the titles, we won the league once and the cup twice and that was great. Also playing for Runar Kristinsson, he is probably the best coach I have had. And of course I played with some really good players there.

4) Last season KR didn't win any trophy. This season it has lost a very important player as Gary Martin. In you opinion, KR is ready to return to the level of the past?

I think that KR will always be one of the best teams in Iceland, it dosen't matter if they lose some player or not, they will always get some strong player in return. But of course it's hard to replace Gary Martin because I think it is hard to find a better striker then him and who is willing to play in Iceland.

5) How has it been your first season with AIK Solna? Were you satisfied about the third place in Allsvenskan?

My first season in AIK was good. It took a bit of time to get used to every thing and I didn't play that well in the beginning. But after a few games I started to feel more comfortable on the pitch and then my performances got better, and as I sad before I think I had a good first season. I can’t say that I was satisfied with third place because we were so close to winning the league, only 3 points so that was a little bit disappointing.

6) What are AIK Solna goals for this season?

Our goal is to win the league.

7) What are the main differences between Icelandic and Swedish football?

The main difference is the tempo of the game, it is a lot higher in Sweden and that took a bit of time to get used to. Also the pressure, when I played in Iceland people talked about the pressure of playing in KR, from the fans and the board to win titles, but I have to say that it is nothing compared to the pressure in AIK.

8) Three Icelandic players have already played in Italian championships (Emil Hallfreðsson, Birkir Bjarnason and Hörður Björgvin Magnússon). What do you think about Italian football? Would you like to play in Italy someday?

I think Italian football has dropped a lot in quality over the last few years, when you think about teams like AC Milan and Inter they are not as good as they were a few years ago and the only team which is doing well in Europe is Juventus. That is probably because there is more money in other leagues. But still it is one of the biggest league in the world so of course I would like to play there one day.

9) What are your hobbies? How do you like to spend your free time?

I enjoy playing golf in my free time. I played a lot of golf when I was younger so I have a little background in it.

10) At the beginning of 2015, you made your debut with Icelandic national team. How did you feel during those days?

Yes it was great, it had been my goal for a long time to play for the national team and it felt great to reach that goal.

11) You and Diego Johannesson Pando are going to be the future in the right-back role of the Icelandic national team. How much is important for you Birkir Már Sævarsson's experience? Do you think you can play together?

This is a hard question, we have only trained together a few times and I’m not sure that we can play together since we are both right backs. But I think Birkir is a really good right back and experienced.

12) You've often played with the national team in these last months. You think you are present in the 23 players who will go to France?

It is hard for me to say if I'll be in the final squad or not, but you have to believe in yourself and in my mind I think i should be, but there are a lot of good players competing for a spot so we will have to wait and see.

This one is also hard for me to answer, I’m just focusing on being in the squad that goes to France.

14) What are your dreams and your hopes for the future?

My short time goals are playing well for AIK this season and being part of the national team that goes to France. My long time goals are something I’m not willing to share, but you have to dream big.

15) One last question about your country. Just this week there have been numerous protests in the square and the Prime Minister has resigned following the scandal of Panama Papers. Many people fear to fall back down in a similar crisis to 2007. What's your opinion about that?

I just have to admit that I haven’t read to much about this, but of course there is always a risk and when the country is being run by men who are not competent that makes the risk even greater.
Pubblicato da Fabio Quartino alle 19:55:00