Interview with Carolina Mendes: a Portuguese girl in Grindavík, with Italy in her heart and a passion for traveling

Carolina Ana Trinidade Coruche Mendes was born in Estremoz in 1987. She is one of the most representative football players of Portugal's national football team, that reached the first, historic qualification to the group stage at Euro2017 in the Netherlands. Her career begun right in her country, between Ponte Frielas and 1° de Dezembro, before going abroad. While in Spain she showed her potential with Estartit and Llanos de Olivenza, enough to be noticed and acquired by Riviera di Romagna, where she has been the absolute protagonist of her team right away. Subsequently, she was traded to Rossiyanka, in Russia, and Djurgårdens IF, one of the most important clubs in Sweden.
In the current season we have the pleasure to see her playing in the Pepsideild for the Grindavík club. 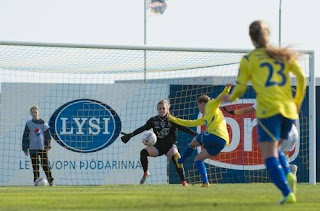 The newly promoted club of the Suðurnes region worked well in the transfer market department, closing some operations that do not give back the impression of a club that is just figthtng to stay in the major league, but quite the opposite. Among the trades the Brazilian top players Rilany Aguiar da Silva and Thaisa de Moraes Rosa Moreno stand out. 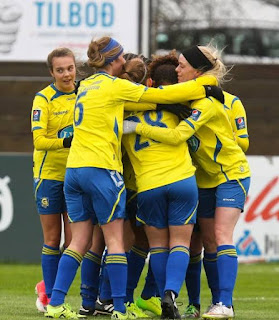 Carolina Mendes, other than being renowned on the field, runs a blog (named "As Viagens da Carol") about one of her biggest interests: traveling. The blog is very well curated and it is a good introducive guide to many of the places she had the pleasure to visit. (Here is an article about Iceland taken from Carolina Mendes' blog).

Us of Calcio Islandese e Faroese interviewed her: this is what she told us about her football career (and more!) around Europe.

Hello Carolina! You have played in many European countries: Portugal, Spain, Italy, Russia, Sweden and now, Iceland. How many differences did you come upon?

There are many differences but, in the end, it is still football, after all. There are different ideas and ways of training, for sure. In the Nordic countries football is a lot more physical, while in Italy, Spain and Portugal football is based more on technique.

Right now you are playing in Iceland, in an ambitious club like Grindavík. The club is getting positive results with both men and women's teams. What is your goal and what do you expect from yourself?

Yes, it is a new team in the major league, we are a quality team and I hope to help the club to reach the goals we set for ourselves. We have to work hard to do that: we are a very young team and we have many qualities, but we have to live match by match. We will see how far we can get, but we will try to get among the first five teams in the final ranking.

What kind of memories do you have of your experience in Italy with Riviera di Romagna, both inside and outside the playing field? Do you still follow the Italian championship?

I love Italy and I still have friends there. Yes, I still follow the Italian championship and I have many fond memories of my experience with Riviera: we played a good season and the good alchemy within our group was the key to our positive season. I would like to come back to Italy someday. My fondest memory is the match we played against Torres. Outside the playing field I shared many beautiful moments with my teammates, it was an incredible season.

Women's football is living a period of expansion, but the focus of the media is still greatly inferior compared to men's football. In your opinion, is that a cultural problem, mainly? How can it be solved?

Women's football is expanding, indeed, but there are still some cultural problems about it within our society. People are accepting women's football's phenomenon, little by little, but it takes time. For example, in Portugal the mentality of investing in our sports is changing: there is a lot more support for the teams, and bigger teams have started to open their doors to women's football. The interest about it is increasing: there were 10000 people at the stadium for a championship match between two of the most important teams of Portugal. I can say we are going in the right direction, but it will take some time.

In Italy, women's football does not have a great following. In Iceland, instead, it is on the same level of men's football and it has a good media coverage too. Consider that there are more female football players in Iceland than in Italy, despite the great difference in population! How do you explain these differences about interest? Could you see that with your own eyes?

It is both a question of culture and desire to invest. When I got here in Iceland, I was impressed in seeing more than fifty girls of ten years old playing football. This is very uncommon in Italy. Here there is the possibility to play football at a very young age, like 6, 7 and 8 years old, with a women's team. In Iceland this is normal, but it is not possible in other countries. This happens because in many countries many people look at women's football with the "football is not for girls" mentality. On the contrary, here in Iceland women have the same opportunities of men. For me, it is fantastic to see so many young women playing football and spending time at the football field.

How is the current situation in Portugal about women's football, instead?

There have been a lot of changes in Portugal recently. We are making a lot of progress, but there are still many things to do about that. We have two major teams and we are gaining visibility: there are a lot more people in stadiums for the matches. The Federation is helping national teams a lot and we are getting positive results: as a matter of fact we qualified for the women's European championship. This too will help getting us visibility. People are starting to see us with different eyes. For me it is a big step forward, it can change our culture. These are battles we have fought for a long time and things are finally changing.

Let's talk about the European championship: how far do you think Portugal will get? And, in your opinion, what are the favourite teams for the final victory?

As I said before, it is the first time we participate in this competition. But we did not get there by chance: it was thanks to our strengths that we are here. We are not here just to participate: we want to show everyone what we can do and get as far as we can. My favorite teams for the victory? Germany and Spain, in my opinion.

As we said before, you played abroad for a long time. Do you think you will remain in Iceland, or is your goal to have similar experiences in other countries?

If I will be able to I would like to measure myself against other countries' championships, we will see what the future holds for me. For now I am focused on Grindavík only and I will do my best to help my club to reach the goals we set for ourselves.

What is the difference between the Carolina who moved her first steps as a football player in Portugal and the Carolina of today: a beacon of Portugal's national football team who is about to play the European championship as a protagonist?

Well, there is a huge difference for sure, because when I started I played just for fun, now I am a professional. Sure, I still have the same passion, but now football is my job, so I have to look at sports with different eyes. I hope to be called to play for my national football team for the group stage qualification of Euro2017, it would be my first time in a competition like that and it would be very exciting!

Where do you see yourself in ten years? Do you think you will stay within the football world after your professional career?

I think I will be the same girl I am now, with lots of dreams, ideas and all of her life to live. I would have never thought to get this far within the football world. I have started to practise this sport late, I was sixteen years old already. Women's football was not as developed as it is now. Professional football did not exist then, I was an amateur and I played just for fun. I have always dreamed of becoming a professional player and I succeeded in that. When my career will end I will probably stay within the football world, or maybe I will take a break, who knows. I am sure I will face new challenges when I will quit, but right now I am enjoying these moments. Last year was one of my best personally, for the results I reached with my club and my national team, I hope to keep doing that for several years to come.

Let's finish the interview by talking about your big passion: traveling. You run a personal blog right about this topic: "As Viagens da Carol" ("Carol's journeys" in Portuguese, ndr). Can you tell us more about it? What are the places you visited that you remember more fondly?

Yes, my other passion is traveling, and when football gives me the opportunity of doing that I travel as much as I can. Sure, this means being far away from the people I love all the time, but it was a choice of mine. Since I started traveling so much I feel the necessity to show other people my passion, so I opened my personal page and started writing on my blog, "As Viagens da Carol", indeed, so other people can see another side of my life outside the football field. The last place I visited was Madagascar, it was special because I did it together with my brothers. 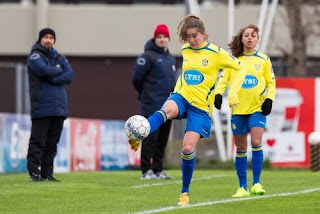