Skallagrimur, making history from the Egils Saga to the football pitch

Skalla-Grímur was a viking man who began to colonize Borgarfjordur between IX and X centuries. Nowadays his descendants play football, basketball, badminton and many other sports in a sport club with his name. In this way, Skallagrimur goes on in being a key figure for Borgarnes, a very nice village at the shore of Borgarfjörður in Icelandic West Coast.

Skallagrimur football team played in Urvalsdeild just once, in 1997. In 2012 it gave up in having a first team and restarted from 4.deild the following year. This season it was third in the championship, missing playoff for the second time in a row.

Here you are the interview with Ívar Örn Reynisson, the chairman of the local football club, who illustrates us the club organization, history and ambitions of Skallagrimur: 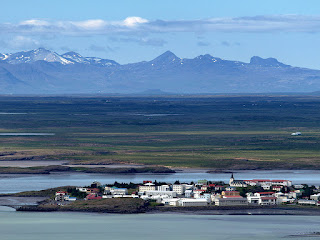 Borgarnes at the shore of Borgarfjörður (flickr.com)

1) Skallagrimur is a sport club belonging to Borgarnes, a nice 2.000 people village on Borgarfjörður coast. How important is your club for Borgarnes?
The club is very important in our community, especially for the kids. We have around 150 kids under 16 years old training with us and we have an important role regarding their hobbies and activites. We normally have 100-200 people attending our first team matches, so the matches are fairly big events during the summer.

2) Skallagrimur gives the opportunity to practice many sports such as football, basket, athletics, badmington and swimming. In which discipline have you got the best results?
Our basketball team has had the biggest success. They have played in the top league for many years although they got relegated last season. They´ve never won the championship but been to the play-offs several times and been runners-up. We´ve also had a few successful badminton players and athletes. Our most famous athlete, Íris Grönfeld, a javelinist, competed in the 1984 Olympics. I must confess though that although she´s from our community and still lives here I don´t think she ever competed under the badge of Skallagrímur, but rather UMSB, which is a kind of a federation for all the small clubs in our community.

3) Skallagrimur has got a theater division too. It's unusual for a sport club to have a acting division. What can you tell us about that?
There´s a long history behind that. Originally our club was a sort of youth organisation, that didn´t focus solely on sports. It also, like other youth organisations in the country, held cultural events where the acting division draws it´s origin. And it´s one of the departments that has survived over the decades. The club will celebrate it´s 100th anniversary next year and the acting department is still a strong part of the club.

4) How are you organised? I mean, has Skallagrimur got a single board or has any discipline got a different board?
Each department has it's own active board. Also there´s an "inactive board" where the chairmen of each department meet. That board only meets twice a year now, it has almost no role anymore. Furthermore we are a part of a federation, called UMSB - the youth league of Borgarfjordur. That´s a bigger orgarnisation, kind of an umbrella, where all the departments of Skallagrimur, and other clubs in Borgarfjordur meet on a regular basis to discuss mutual interests.

5) Let's talk about football. You've been third in the championship for the second year in a row, not so far from playoff. Are you satisfied or disappointed about last season?
We were very frustrated this season not to make the play-offs. We came very close and it was down to one match, against KH at home, where we lost 0-1 at home after attacking the whole game and conceding straight from a corner. After that match we didn´t have a chance anymore with two matches still to go. The season before that the chance maybe wasn´t as realistic as this season. We had a good team for this league and we should have reached the play-offs.

6) What are your goals for next season? And what are you doing to reach these goals?
We aim for promotion like last year. Like last year we have already hired a well qualified and experienced coach as well as keep most of our squad of players. We also have very promising players coming through our youth development and they will strengthen our squad. We´re also working on finding the right players for us that will make us real competitors on promotion. Our pre-season has already started with two friendlies that we won but we´ll go on full blast in February when the squad starts training together on a regular basis.

7)  In 1997 you played your unique season in Urvalsdeild while in 2012 you gave up in joining the championship. What can you tell us about Skallagrimur's recent history?
Well it´s been ups and downs through the years. In the 80s the team played in the b- and c-league but in the early 90s things started to really move upwards. They won promotion after promotion and went all the way to the top league in 1997. It has to be said that the stamina of the club wasn´t enough to keep them there, or in the upper leagues. The reason is mainly money, it was more expensive than the club could handle.

After getting relegated from a-league to d-league in a few years, the club was in heavy debt and it took a lot of work to pay it all off. The boards of those years worked enormously to help the club pay off the debt.

Then the credit crunch in 2008 also had very negative effect since most of the sponsors had a hard time during that time and withdrew some of the sponsorship. But around 2010 the club was finally debt-free and was able to start building again.

In 2012 we only had a handful of home-grown players to build a team on. It was considered a necessary but hard decision not to have a first team that year. A necessary sacrifice for people in the community to see that we have a club no matter what. The current home grown players took the initiative after that season to start again and help the board to build a team and they worked very hard in the process of creating the atmosphere and enthusiasm necessary to have a proper team.

Since then we have aimed at handling youth development as best as we can and recently we hired a general manager, who is also a coach in our youth department. He´s our only full-time employee and we´ve seen many steps forward since his appointment. The main focus is on youth development and we see that it´s paying off since now we have a strong basis of home grown players in our first team that we can build on to make a strong squad.

8) What do you need to come back in Urvalsdeild? Do you think it possibile?
We need a millionaire! No to be honest I don´t think we can make it to Úrvalsdeild based on our own players. We don´t have any of our home grown players playing for the current top leagues teams so we don´t really see it in the forseeable future. Our realistic goals are to make it to the c-league and stay there. That´s where clubs of our size are. We might on occasions get promoted to the b-league but over the next decades the goals of this club should be the c-league.

9) Have you got any kind of collaboration with any other football team?
A few years ago we had U19 and U17 teams with Vikingur Ólafsvík and the other smaller clubs from Snæfellsnes. One of their current 1st team players played with us there. We are in talks with one of the giants of Icelandic football, Fram Reykjavik, to co-operate in the U17 boys team and U15 girls team. They have gone through a transition over the past few years and they aren´t currently the force they used to be. So we´re really hopeful that this co-operation will be a win-win for both clubs and that it will continue for years to come.

10) The name "Skallagrimur" comes from a character of the Egil's Saga. What are the most important things about him to know? Why is he so important for your land?
Skallagrimur was the viking settler who settled in Borgarfjordur in the 10th century. He´s a key character in our most famous saga, Egil´s saga which tells the story of his famous son, Egil Skallagrimsson. He escaped the king of Norway and his tyranny to make a new life for his family in a new country. Skallagrímur is less famous than his son, but was a nicer person so to speak.

11) What are your dreams and hopes for Skallagrimur's future?
We hope to have a stabile club, both according to first team performance, our youth developement, our professionalism and finances. We want to be a club where children and youth can enjoy their hobbies and we also want to create professional football players. It´s always a big job for a small club in a small community but we´ll continue to build our club with our best intentions.