Jonathan Glenn, scoring goals from the Caribbean to the Artic

Jonathan Glenn has been voted as the best player during Urvalsdeild 2015 by our blog. He has played 20 matches scoring 12 goals in the season, playing with IBV till July and than with Breiðablik.

We've had a quick talk with Jonathan after his trips with the Trinidanian national team. He has just renewed with Breiðablik for a two years contract. By this confirmation, the green&white team from Kópavogur begins the assault to the next Urvalsdeild.

Here you are his answers, fast as he runs to the goal: 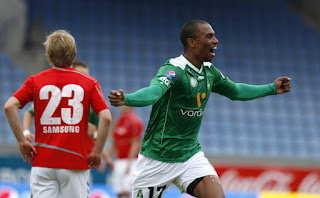 1) Jonathan Glenn, from Trinidad and Tobago to Iceland, passing through the US. Which have been your best experiences in these countries?
Each country has impacted my life in different ways. I've had to adapt to new cultures and way of living which has helped me to have new perspectives on things.

2) In his blog, your former coach Sigurður Ragnar Eyjólfsson takes you as an example of talent. How was your rapport with him? Was he important for your growth as football player?
I'm humbled by how highly he thinks of me and we still keep a good rapport. His belief in me was very important to my growth.

3) You've gone on in scoring very much with Breiðablik. How are you doing with your new team? How is playing with a long career player such as Gunnleifur Gunnleifsson?
I really enjoy playing at Bredablik. We have a great group. It's great to have a guy like Gully in the locker room. He's a great example to everyone and what he's doing between the sticks at this stage in his career is unbelievable.

4) Last year you made your first appearence in your national team. This year you scored against Mexico. How do you feel when you play for Soca Warriors? How many chances has Trinidad and Tobago got to join Russia 2018?
It's always an amazing feeling to represent your country at the highest level. I want to continue to do well and help us qualify for the World Cup in 2018.

5) You are graduated in psychology and marketing. It's not easy for athletes to complete their studies, so... congratulations! At the end of your football career, would you like to keep working in football or would you prefer to work for anything belonging to your studies?
Thank you. I'd say a bit of both as I'm already seeing ways where my academic background would be of a great value in a football setting.
Pubblicato da Fabio Quartino alle 16:22:00